Showing posts from September, 2009
Show all

What is John Reading

For those who want to have a better understanding of the pleasure of being a Do-It-Yourself Frugal Prosumer check out Matthew Crawford’s book Shop Class as Soulcraft. The four Frugal Prosumer options to obtain this information are: Read the free original essay that his book is based on. Read the book for free by checking it out from your library. If you can't find it there see if your library can get it through an interlibrary loan. To find out what libraries have it in your area or the world go to www.WorldCat.org Buy it discounted at Amazon Read for free how Trent at The Simple Dollar has made similar discoveries in his own life. For those who homeschool? It can help you understand how manual work is really academics in disguise.
Post a Comment
Read More and/or Watch Videos »

What is John Reading

- September 25, 2009
Check out the NY Times article on the dangers of Debit Card Fees . I use debit cards but my Bank and Credit Union have assured me they will not charge me overdraft fees. A series of articles at bargaineering.com on how to deal with debt collectors .
Post a Comment
Read More and/or Watch Videos »

- September 24, 2009
I am totally happy these days as my tomatoes are turning red and I can now get going with dehydrating. There just isn’t anything more wonderful than a sweet little chunk of tomato in the winter when all you find is pretend ones in the stores. It’s been a couple years since I made any. Last year was a no show year for tomatoes. This year I have huge ones. So, the frugal prosumer tool of the day is one of my dehydrators. One of my six. I have acquired them very frugally by the way. They pay for themselves whatever the cost though. I have learned with tomatoes that just when you think “that slice is way too thick”, that it’s just right. It seems that they measure in at a bit less than 1/2 inch thick. Slice them and put them on your trays but don’t let any of them get too cozy. Give them a little space. Some things aren’t that important to keep a distance but tomatoes are so juice laden that they can mold if the conditions aren’t right. Put the temperature somewhere between 135 and 145
Post a Comment
Read More and/or Watch Videos »

- September 22, 2009
A week ago we completed our two month “food money fast”. We fasted from spending any money at all on food items. We only told people if it meant we would have to lie to them if we were asked about buying something.   At first we were going to stock up for the venture. We determined that would be cheating. So we just proclaimed a certain day “the day” and whatever we had on hand was it. In the two months we ate from our pantry, freezer and garden.   I can’t even count the blessings that trickled in from unsuspecting friends and family. I always attribute that to them “listening” to God. I was out of eggs and my sister-in-law just happened to show up with excess. The latest incident that put a grin on me was the “creamer” thing. Now that is definitely not a necessity for life but it was a little treat I like in my tea and coffee. But I just figured I would rethink it when the time came to go off the fast. A friend walked in one day with boxes of it. He had an excess and thought of us. T
1 comment
Read More and/or Watch Videos »

And now for on the road begging. Seriously, you made need this skill someday. (by Ben)

- September 15, 2009
Instructions: Step1 Get some cardboard and a sharpie Step2 Write on the cardboard “Hungry(or hungry and traveling)” Step3 Go to a busy place Step4 Hold sign and look sad Step5 Get fed I'm not kidding this works. People are much more willing to give you food than money. In my experience you will always get fed. Feel free to be more creative with your sign. Like "food for thought" with a little smiley face and an exclamation point.
Post a Comment
Read More and/or Watch Videos »

The Notorious Hobo Dinner (by Ben)

- September 15, 2009
The hobo dinner consists of potatoes whatever veggies and meat you want wrapped in tinfoil and cooked over the fire(and don't forget the soy sauce or whatever other seasonings you would like). This is a great meal for the hobo stove you've all made by now. All you have to do is get some good coals burning, set the hobo dinner right inside the hobo stove, and let that baby cook . It should only take about 30 minutes maybe less. (I will probably end up making a video on how to do this). "The Mother's" elaboration on the hobo dinner Lay down a couple layers of tinfoil on the counter (this is an individual portion). Pull off some cabbage leaves and put a couple down first (they create a burn barrier around the food). Pile on your chopped up potatoes, onions, carrots and whatever along with chunks of meat if you're a carnivore . Plop a bit of butter on that and sprinkle with soy sauce and seasonings of choice. Cover that with another cabbage leaf . Fold up the t
Post a Comment
Read More and/or Watch Videos »

Now Something about Food (by Ben) 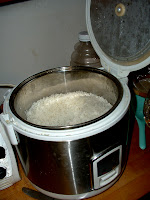 Let's start with rice being that it's the king of cheap. I personally can't get enough rice. And I've been eating it about 19 years for the majority of my meals. Why am I not sick of it you ask? Well let's take a look at the Japanese and how they do it. Here in America we use meat, fish, eggs, veggies and other things of the sort for the bulk of our meals, which in turn jacks up the cost of said meal. Although eggs are a fairly inexpensive source of protein. In Asian countries (and most of the world actually) rice is used as the bulk of the meal. Meat and other things are more to flavor the rice so to say. Now about Sushi. Contrary to popular opinion, sushi is fairly cheap to make. A California roll (avocado,cucumber, mock crab meat) which would normally cost between $6 to $7 a roll at a sushi bar costs under $1 to make yourself. Another cheap dish is a hand full of veggies with some soy sauce and you've got a healthy tasty meal on the cheap. With the small a
Post a Comment
Read More and/or Watch Videos »
More posts