Showing posts from March, 2013
Show all

Groups Of Adults Turn To Cooperative Households To Save Money

- March 28, 2013
Groups Of Adults Turn To Cooperative Households To Save Money "With the cost of living on the rise and showing no sign of slowing down, total strangers desperate to save money are moving in together. As CBS 2’s Dana Tyler reported, older adults and even families are using this method to pool their resources. And the new communities are redefining the modern family. Two million Americans over the age of 30 now live with a housemate or roommate, and shared households make up 18 percent of U.S. households – a 17 percent increase since 2007." We have found one of  the main reasons we have been able to live so well as Frugal Prosumers is because we have done cooperative living for most of our life. A few things we have found that make it work are: Already have relationships and know each other and share similar philosophies. Already have a history of community living and what makes it work. Set up so everyone has some personal and private space. We have also found
Post a Comment
Read more 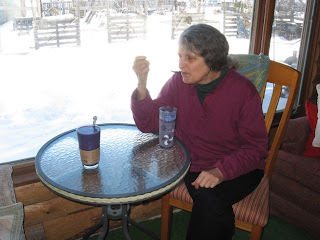 Smoothie making can be an art? Well, it turns out that way sometimes. John says I'm the artist and he's just an accidental artist. He says mine is almost always art ( a relative term here) and 1/2 the time his creations need a little rearranging or possibley repurposed back to  where it came from - the trash. Or his McGyver garage for the next round. Lest we digress too far I must tell you what is in this deliciously purple drink. I can't remember, well exactly. The base this time was coconut milk. It is usually yogurt. Then I went to the freezer and captured some frozen bananas and then some cubes of wild grape juice, not so wild pineapple juice, crab apple juice and just a few leftover frozen blueberries. And let's not forget the strawberries that started this whole thing on the way home from the grocery store as I caught a whiff of their strawberryness. Usually I like to have my smoothies a bit on the tangy side so I throw in some concentrated orange juice or ju
Post a Comment
Read more

What you do online can and will be tracked

- March 18, 2013
The Internet is a surveillance state  is a good article for those of you who are paranoid. Yes google may know more about your preferences than your wife. Having worked in the computer field for the last 25 years this is pretty much common knowledge to me and sadly unavoidable. If the director of the CIA can't stop the snooping on him, we don't have a chance. If you're like me, and do a bunch online, then you will become aware of how this is done and possibly prevent some of it . But because I'm online so much there is no way to completely stop them from tracking me. If you think by not having much to do with computers you are safe, think again. Because you're not familiar enough with computers to know what not to do, they've got you. Be careful, but being paranoid about it (you have good reason to be) is not going to change anything.
Post a Comment
Read more 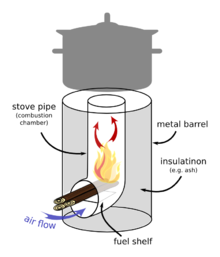 I have been following the development of rocket stoves for over 20 years. Recently I have been doing more experimenting with them. I must say they are very impressive. A rocket stove is an efficient cooking stove using small diameter wood fuel which is burned at a high-temperature because of the insulated fire box and chimney. Cooking stove The rocket stove was originally developed for cooking, where a relatively small amount of continuous heat is applied to the bottom and sides of a cooking pot. Stoves can be constructed from brick, recycled steel cans, or steel sheet metal, or can be purchased. Although rocket stoves are found more commonly in third world countries where wood fuel sources are more scarce,  in recent years their use has increased in developed countries, such as the United States. Some are small for portability, with insulation inside a double-walled design and a chamber for partial biomass gasification and additional mixing to increase BTU production and to
Post a Comment
Read more

- March 02, 2013
Are the Amish the ultimate Frugal Prosumers? Look at this patchwork map of carefully-managed small fields and farms. They are current family farms, worked with horses and mules. It is quite a sight. Click the link below if you would like to see a bird's-eye view of what America looked like 150+ years ago, when we were an Agrarian Nation. Go to Google Maps and type in "Amish Road, Gap, PA." Then back the view out so you see more countryside, and scroll around. Amish Road, Gap, PA - Google Maps
Post a Comment
Read more
More posts