Showing posts from December, 2013
Show all

Exercise just as good as drugs in war on major disease

- December 26, 2013
The Frugal Prosumer understands that health "assurance", not commercial health insurance (which is not health insurance but sickness insurance), the most important thing. And exercise for many would be the most important health "assurance" tool. "Exercise could be as effective as some of the best drugs which protect against major diseases, research has found. A study of more than 300 trials has found that physical activity was better than medication in helping patients recovering from strokes - and just as good as drugs in protecting against diabetes and in stopping heart disease worsening. The research, published in the British Medical Journal, analysed data about studies on 340,000 patients diagnosed with one of four diseases: heart disease, chronic heart failure, stroke or diabetes. Researchers said the findings suggested that regular exercise could be "quite potent" in improving survival chances, but said that until more studies are done, p
Post a Comment
Read more

How to make an inexpensive diffuser 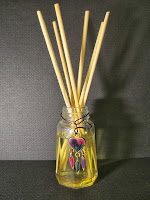 This video is about how to make an inexpensive diffuser. What you will need: glass salt (or pepper) shaker that is of course clean 9 oz of canola oil, 9 drops cassia bark essential oil 5 drops sweet orange essential oil 5 drops of geranium essential oil 3 bamboo skewers that are about 12 inches (cut the pointy end off and cut the skewer in half).   Measure your oil, put it in shaker, put drops of essential oil in the oil, stir it up a bit and put the skewers in. Let sit a few hours, then flip them over and put back in the oil. Adjust the essential oils as you see fit. And from here on out when you think of it, flip the skewers. Of course you can use fragrance oils too. The ones you buy use that a lot.  Have fun experimenting with different combinations of essential oils. Oh and of course embellish your little containers if you want. Toodles
Post a Comment
Read more
More posts