Showing posts from December, 2012
Show all

My Christmas present to myself. I recently acquired three new fantastic food preserving tools. FoodSaver Wide-Mouth Jar Sealer Ziploc Vacuum Starter Kit Tattler Reusable Canning Lids & Rubber If one vacuum packs food (removes the oxygen which allows food to spoil) with a vacuum pump, food will last much longer in the freezer, fridge, or dried. Pickled beans in 20 minutes. This vacuum pump that comes with the  Ziploc Vacuum Starter Kit  is an ideal inexpensive way to do this. I got mine for around $5 dollars at Wal-mart. The bags that come with it don't work very well. Other reviews on the web will attest to this.  The secret is a second tool. The  FoodSaver Jar Sealer . Available for around $10 on Amazon. It is designed to go with the  $100 food sealers. But the Ziploc pump is much cheaper and doesn't have to have electricity to run it.  Just take a canning jar, put a regular canning jar lid (or tattler lid) on it, put the Jar Sealer over that, and the
1 comment
Read more Early March new shoots in our yard. We have lots of them in our yard and are very abundant in our area. Young spring shoots and leaves under five inches taste similar to mild onions when fried in butter. They are also a mild pain killer and in large quantities can be hallucinogenic.  The leaves quickly become fibrous so they can only be eaten young (but you can make cordage out of the older leaves.) The flower buds, a rich source of iron, are distinguished from the plant's non-edible fruits by their internal layering. The blossoms are edible as well, raw or cooked (as are seeds if you find any.) The dried flower contains about 9.3% protein, 25% fat, 60% carbohydrate, 0.9% ash. It is rich in vitamin A.  The closed flower buds and edible pods are good raw in salads or boiled, stir-fried or steamed with other vegetables. The blossoms add sweetness to soups and vegetable dishes and can be stuffed like squash blossoms. Half and fully opened blossoms can be dipped in a light b
Post a Comment
Read more 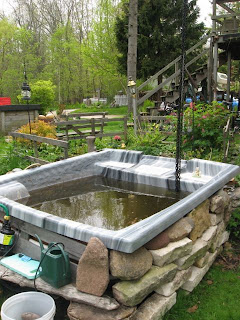 Hot tub rain water collector & fish pond. Shower stall converted to rainwater tank. I am a big advocate of collecting rain water for your garden, lawn, "distilled" water, household use etc. Start with a simple rain barrel and move up to more than one or bigger containers. I have five 55gallon barrels, a swimming pool that holds 3000 gallons, two square containers that hold 250 gallons each, and an old hot tub (used as my fish pond) 300 gallons. 250 gal tank with pallets for beatification. These are great for emergency supplies but my main reason is to have free water for my garden. I know some people who pay  $100 a month for water. Yikes! 2 55 gallan rainwater tanks Around here you can get used barrels for $5 to $10. If you want them to blend in you can get spray paint specifically for plastic. Have a screen to keep out mosquitoes. I keep gold fish in them instead as they are fun to look at and not only eat all the mosquitoes larva but fertil
Post a Comment
Read more 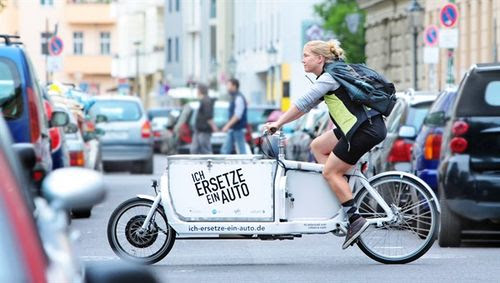 Another interesting article on biking. Over the years I have made many bike carts. While I lived in Tokyo, Japan, a country that uses bikes a lot for short distances, as an experiment I moved from one apartment to another using my bike cart. Yes, even there I got a lot of strange looks. Read this article for some cool ideas.  Low-tech Magazine: Cargo cyclists replace truck drivers on European city streets "Research indicates that at least one quarter of all cargo traffic in European cities could be handled by cycles. And, by using special distribution hubs, larger vehicles and electric assist, this proportion could be even larger. A cargo cycle is at least as fast as a delivery van in the city - and much cheaper to use, giving a strong economic incentive to make the switch. Cargo cycles also bring important economic advantages to tradesmen, artisans and service providers." During the first half of the twentieth century, tradesmen and artisans made use of cargo
Post a Comment
Read more 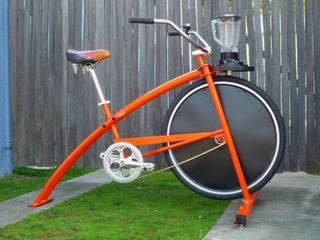