Another interesting article on biking. Over the years I have made many bike carts. While I lived in Tokyo, Japan, a country that uses bikes a lot for short distances, as an experiment I moved from one apartment to another using my bike cart. Yes, even there I got a lot of strange looks.
Read this article for some cool ideas. Low-tech Magazine: Cargo cyclists replace truck drivers on European city streets 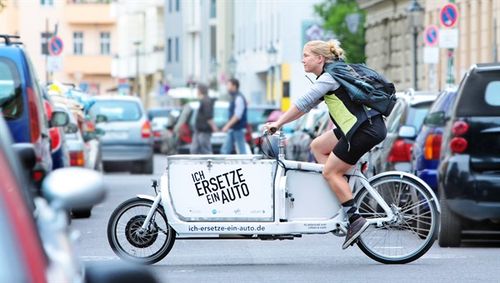 "Research indicates that at least one quarter of all cargo traffic in European cities could be handled by cycles. And, by using special distribution hubs, larger vehicles and electric assist, this proportion could be even larger.

A cargo cycle is at least as fast as a delivery van in the city - and much cheaper to use, giving a strong economic incentive to make the switch. Cargo cycles also bring important economic advantages to tradesmen, artisans and service providers."