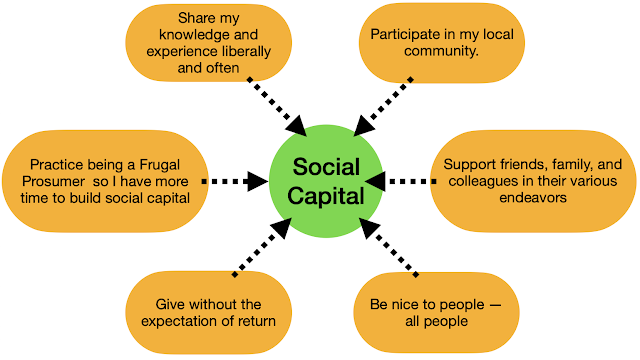 Social capital isn’t a new idea, although the term itself is relatively recent. In the past we’ve called it other things: goodwill, fellowship, community. The concept existed in ancient cultures as “the golden rule”, or the Biblical admonition to do unto others as you’d have them do unto you (practicing Allélón ).

“The core idea of social capital theory is that social networks have value,” writes Robert Putnam in Bowling Alone. “Just as a screwdriver (physical capital) or a college education (human capital) can increase productivity (both individual and collective), so too social contacts affect the productivity of individuals and groups…Social capital refers to the connections among individuals — social networks and the norms of reciprocity and trustworthiness that arise from them.

You create social capital when you do volunteer work, help your neighbor start their car, have your group of people over for a picnic, or join a softball league. Any time you participate in your community, you’re generating social capital, both for yourself and for the other people involved.

In a well-connected community, even loners profit from the high level of social capital. According to Putnam, “If the crime rate in my neighborhood is lowered by neighbors keeping an eye on one another’s homes, I benefit even if I personally spend most of my time on the road and never even nod to another resident on the street.”

“Social capital turns out to have forceful, even quantifiable effects on many different aspects of our lives,” writes Putnam. What is at stake is not merely warm, cuddly feeling or [community pride]…Our schools and neighborhoods don’t work so well when community bonds slacken…Our economy, our democracy, and even our health and happiness depend on adequate stocks of social capital.”

When we don’t interact with each other, when we isolate ourselves inside our homes, we have less motive to help our neighbors and improve our communities.

“The ebbing of community over the last several decades has been silent and deceptive,” writes Putnam. “Weakened social capital is manifest in the things that have vanished almost unnoticed — neighborhood parties and get-togethers with friends, the unreflective kindness of strangers, the shared pursuit of the public good rather than a solidary quest for private goods.”

When I think of social capital, I’m always reminded of my neighborhood. It’s easy for homeowners to stay inside and not interact with neighbors. But doing so creates barriers rather than build bonds. So, we have made a conscious effort to foster fellowship, to get to know each other. As a result, we’re much more likely to lend a hand when a neighbor needs assistance.

People with lots of social capital can find help when they need it; those with little social capital tend to spend a lot of time frustrated and alone.

Although George Bailey repeatedly sacrifices his own interests to create social capital, you can often create win-win situations in which everyone profits. But the best way to build social capital is to help others without expecting anything in return.
What concrete steps can I take to increase social capital, for myself and for my community?

This article is adapted from: Money Bo$$: Master Your Money- And Your Life