A pane in the deck?

We have given titles to many of the things we do. Wild food foraging, feral fruit farming, grocery store foraging, garage sailing, Craigslist crawling, etc. But what do we call it when we harvest a hundred windows or a 600+ square foot deck? A pane in the deck? Sorry.

Again it’s about relationships. A friend called us to say they were replacing all the windows and screens in the eight story apartment complex they lived in. Aaannd.. they had permission to take all they wanted.

We finally stopped hauling at 200 windows. 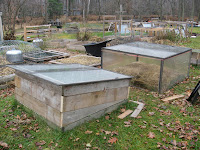 It was hard seeing dumpster load after dumpster load of good windows going to their doom. But out of respect for Mary and the “pretty factor” on the property, I let them go.

We now have a good number of cold frames ready for early spring planting. We also extended our fall veggies under the mini green houses I constructed. 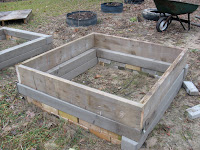 Some parts of our land floods occasionally. Since it is futile to plant in that low area the reality of raised bed gardening has taken on an even “higher” meaning. I have raised the height of my four by four foot beds to around 20 inches. Accomplishing this could be very expensive if you had to purchase everything new.

Again relationships. Chad had been Craigslist crawling and found a deck free for the hauling if we tore it out. 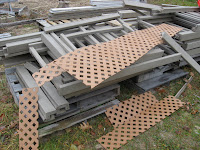 It was only a few years old and built out of those expensive plastic boards. Alas it had molded and the owner didn’t want to deal with it. It was a win win situation for all. He was reimbursed for his deck and we took it away. We acquired materials for decks (nothing a little bleach won’t cure) and garden boxes. We incorporated the cinder blocks Chad found Craigslist crawling (again) with the bricks on hand already and the deck posts and will see if we get a floating garden or a success.
Labels: Garden One-Another Prosumer