"Can" you cook? More on the Hobo stove 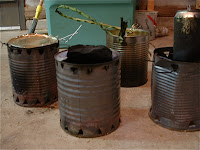 I think Ben did a great job on explaining the hobo stove concept. And while we were up north Wisconsin for a week we had a bunch of interested campers. John was Nature Center man for the week. He had a great assistant who helped keep his absent minded mind on track.

Pictured is the best little prosumer stove you ever want to light. It contains the fire as well as concentrates it for faster cooking or boiling.

Since we have started making and using the thing we can say there are as many variations on it as there are people that try their hand at making them. And there are sights you can get info on them too.

We had the camp cook saving the cans for us during the week. If you have one of those can triangle hole punchers they make tidy little holes all around the can. We punched a couple of holes at the top on opposite sides and make a coat hanger handle for moving it around. I even made a cattail reed handle. One camper took the part that was can opened off , put a coat hanger handle on it and made a little “frying pan”. You can make your own grate by criscrossing wire or hangers.

We made a little cooking implement with a soda can cut open on the side.The campers took some slices of apple, drizzled honey over them and cooked them. mmmmmmm
Labels: Food Prosumer

Welcome to Our Blog